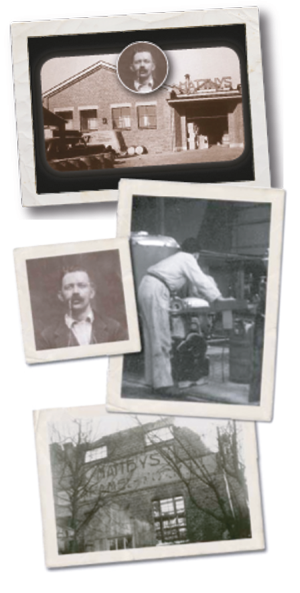 Matthijs is a family business in heart and soul. The base was laid from a residential building and has become a well-known sugar factory. Throughout the years, Matthijs has known various highlights but of course also some downfalls. It all started in 1920…

How it all started
On January 14, 1920, Walther Matthijs started his own business from his home. He started with nothing more than a stove and a large cooking pan, without money but with a lot of passion. His father had been a confectioner and he had learned a lot from him. Through experimentation and evaluation he made his own recipes. The total number of staff for administration, sales, packing and cooking consisted of one man, Walther Matthijs himself.

Hard work pays off
The hard work quickly payed off and two years later Walther was honoured his petition for setting up a bakery for small sugarworks. Due to the quality of his products and the right sales channels in the Netherlands and Belgium, the company experienced a strong growth. As a result, Walther was forced to move to a new, larger factory named ‘Matthijs Caramel Works’.

Dark days
However, Walther also faced severe setbacks when the Germans shut down his factory during World War II and later destroyed the entire factory with a grenade fire. Walther did not give up, resulting in a new factory. Walther, named Opa Bollekes by the family, worked with his nine sons in the ‘Bollekes factory’. Together, they conquered the market with Matthijs’s liquorice and continued to grow.

From liquorish factory to sweet/candy factory
After the successes of Walther Matthijs and his succeeding son, Leo Matthijs, in mid-1995,it was Walter Matthijs’s turn to take over. He had the ambition to bring Matthijs to an international level. Soon the first winegums were produced, a big step for the company which previously only produced liquorice.

Matthijs is still growing
Now, almost 100 years after its foundation, the company is still owned by the same family, but nowadays they work with the latest technologies and in much larger volumes. A total of over 100 different types of sweets is produced for customers in Europe, America and Asia. Walther Matthijs would not believe his eyes!